Amazon’s “Vast of Night” is a Richard Linklater, sci-fi, “All the President’s Men” thriller mash-up 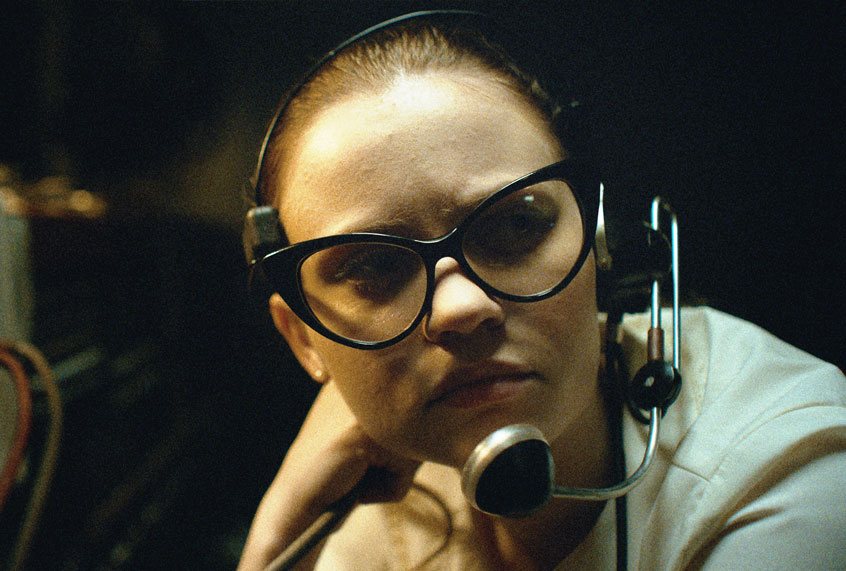 Brace your brains! Among May’s streaming movies is “The Vast of Night,” director Andrew Patterson’s nifty 1950s sci-fi mystery that “operates on the frequency caught between logic and myth.” That is part of what makes this film, written by James Montague and Craig W. Sanger, so compelling. It pays affectionate homage to TV shows like “The Twilight Zone” and other series of that ilk, (“Tales of Tomorrow” and “Out There”) as well as radio broadcasts from the bygone era.

The story concerns Everett (Jake Horowitz), a DJ at WOTW in Cayuga, New Mexico, and his 16-year-old friend Fay (a fantastic Sierra McCormick), a switchboard operator, encountering a strange sound on the night almost everyone in town is attending a basketball game. When Everett puts the sound on the radio, Billy (voiced by Bruce Davis) calls in to recount a story that leads the intrepid Everett and Fay to investigate further. It would spoil the delights of “The Vast of Night” to reveal more, but the film, available May 29 on Amazon, will satisfy fans of the genre as well as those who are wary of sci-fi.

Patterson shows real craft in his handling of the materials. He employs lengthy tracking shots, but also fixes his camera on Fay at the switchboard for an extended scene that is quite gripping. The film features excellent sound design, and the period language is terrific — as is the rapport between the hyperverbal Everett and Fay.

The filmmaker chatted with Salon about his fantastic debut feature film.

Did you make tape recordings when you were a kid, and do you still have those tapes?

If anyone has those tapes it would be my mother. And she would have kept every scrap of homework and creative endeavor I made if she could. I did have a young fascination with tape recording, and I remember having one in the 1980s. I’d steal chunks of songs off the radio, like every kid. When you realize you can do that, it’s a pretty neat power. I don’t know that I did anything creative on those tapes, but it was a part of my life when I was 5, 6, 7 years old.

This film is both nostalgic and original. What can you say about the 1950s radio and TV influences?

The biggest ones by far were the movies and the media that played on people’s fears and curiosities. “The Twilight Zone” did that better than anything. It’s the 20th-century TV equivalent to a 19th-century novel like “Moby Dick.” It has that much power and strength. Every time something dates, you tend to devalue it because we expect something new and shiny every week, but “The Twilight Zone” is an unbelievable milestone because it’s uncanny and it had this strange TV limitation. They made up miniatures and shot on a backlot and had these scripts that were not afraid to end on ambiguity or tragedy. They had these restraints, and that’s what we leaned into for “The Vast of Night” along with radio dramas of the 1930s and 1940s. There’s a “Third Man,” radio show with Orson Welles [reprising] Harry Lime. A lot of movies from the 1940s got turned into radio drama. “Key Largo” had a great 1-hour radio version with the lead actors from the movie. That was a big influence — those movies of the 1940s that were turned into radio shows. We wanted our film to feel like late ’40s radio drama.

The film is all about storytelling — recording one’s own voice, Billy’s story, which Everett says is “good news” for the radio, the gossip about a family, or the tale of a squirrel eating the wire at the gym, and especially Mabel Blanche’s (Gail Cronauer) recitation of her life. What makes a good story and how do you tell it well?

I think with a good story you have a question in the back of your mind and the storyteller knows how to create an irresolution or imbalance that you are waiting to experience. That can be verbal, or visual, or physics playing out — something is on the edge of a table that might fall off. Until you resolve it, people usually lean in and are transfixed. The stories in “The Vast of Night” are things that you are familiar with, or relate to, but the longer stories in the film have an imbalance or irresolution that you’re waiting, as a listener or viewer, to come to a resolution in a satisfying way. In a movie, you can string these stories together for 90 minutes in a way that continues to be engaging. It [depends on] how much you care about the characters telling them. I enjoy hearing stories told, so I wanted our characters to explain their side of things and do it without anybody rushing them.

Can you talk about the sound design and how you used voices?

I learned that from two pretty pivotal movies, and one steals a lot from the former. “All the President’s Men” — if you watch that film, there are wonderful mysteries on the other side of the phone calls. There’s an early scene where Robert Redford starts to unravel really important information and at the same time there is office activity happening over his shoulder. We are locked in on him looking and curiosity jotting down notes during that pursuit [of information]. It is effective. “Zodiac,” 30 years later, is an homage to that. In the middle of that film, a caller holds the movie hostage by calling into TV program. We borrowed that template, and that’s where that inspiration came from.

I’m curious to hear your thoughts about the power of a disembodied voice.

I don’t know that I have an answer to that.

What about your visual approach to the film? The palette is almost black and white; there are static scenes, times where the screen fades to black, and the camerawork includes some marvelous long tracking shots as well as fixed frames. How did you conceive of the film visually?

The color palette was to show how small towns look at night. Browns and greens with only one instance of red at the radio station. Everett is all blue and silver so he’s cold, and Faye is green and gold, so she’s warm. We didn’t want characters under perfect pools of light. We wanted the characters soft and on the edge. With the visual language, I tried to stay away from anything that would date the film in 10-20 years. The violators are the way you light, edit, and the ways the performers behave and act. They have different styles and approaches so we tried to unstick them in time so the film would look lovely and present and new in 2025 and in 2045. We also tried to do something that didn’t require a lot of editing and punchiness to work. But we had to go back to the script to confirm we could have a 5-minute take rather than 30 shots back and forth. We had a handful of distinct scenes that would play out in 3, 4, or 10 minutes in one case. We tried to make it feel a bit more like a play. We tried to build drama in scenes where you watch Everett thread a reel to reel tape over again or Fay working a switchboard.

Can you discuss incorporating the film’s themes about race, the soviets, the government, surveillance and conformity, and free will?

We lean into heavily the idea of paranoia at the time, and the Red Scare and Communists take over the country and take over the government. We wanted to play up the possibility of that as an alternate narrative to what was going on over the airwaves. It’s a ripe period to have the characters ask and pose things that we could play with without having it take over the movie. The game plan was to ask a lot of questions. With something like race — and I’ve never written or worked on anything that had a minority character — I wanted to have a black character stop the movie for 15 minutes. The two characters, Fay and Everett, are on the forefront of civil rights, so they would listen to someone like Billy, whereas their parents might not.

You capture the rhythm of the characters’ fast-talking dialogue, the language of the period and even the mindset of a small town. Can you describe how you found the tone for the film? It’s affectionate, and it comes right up to the line without ever being “wink wink.”

We wanted it to feel exciting because anything new in someone’s life that is not violent, or threatening, is filled with wonder and mystery and possibility. We wanted that to be the tone of the movie until that is no longer the case. Driving 90 miles per hour down the highway is thrilling until it goes wrong. We wanted to latch on to the future possibility. That’s how we scored the film. The first two thirds don’t have that wonder. Ideally, the tone changes. One tone begins the movie and a different tone ends the film. I check out of films with only one tone, especially if it’s dread all the way through.

You limit the special effects and have incredible period design for a low budget. Can you talk about that?

Low budget was true for us. We knew where to put our money. We painted out satellite dishes on buildings, and painting over signs on buildings, and there are the third act visual effects. The team I hired was from Argentina — Rodrigo Tomasso and Marcelo García — who worked on Juan José Campanella’s “The Secret in Their Eyes.” Our colorist and effects guys were all down there in Buenos Aires. I saved 80% of the budget using them. I flew them up, and they scouted and delivered my vision. They were my earliest collaborators. Our production design was headed by Adam Dietrich. A lot of the look was me being the beneficiary of their work.

There is an amusing bit where Fay recounts magazine stories about the future involving electric cars, vacuum tube transportation, and even personalized phones. Your film is set in the past, but what do you think about technology and the time period?

It’s hilarious, because it’s just like that today. If you subscribe to “Popular Science” and “Modern Mechanics,” you see things that seem impossible that they would exist. It was like that in 1955, 1956, and 1957. Our film is set in 1958, and it’s all hyperbolic. No one predicted the internet. It was all about home appliances, transportation, and communication. Each one of those articles are 100% real. We stole them and found an organic way to get them in the movie and give a sense of Fay.

I like how the film almost boxes the characters into a corner but provides an elegant way out. How did you appeal to sci-fi fans and non-fans?

I don’t run to watch a sci-fi film. I run to watch human drama. I’m fascinated by people talking, and dramas where each person is connected to someone else by a desire for that person or what they want from that person. That’s a stage play way to write. I wanted to do that here and have it smash into a world we all knew. Richard Linklater [mashed up] with a sci-fi/”All the President’s Men” thriller. I’d not seen that done. I wanted a human drama blindsided by a sci-fi plot. The characters in monster and alien movies are often whittled down to one or two feelings. I wanted witty, humbled, scared, and excited characters. And that’s what wonderful novels and stories do. I was trying to bridge a world you don’t get to see.

“The Vast of Night” is currently available to stream on Amazon.