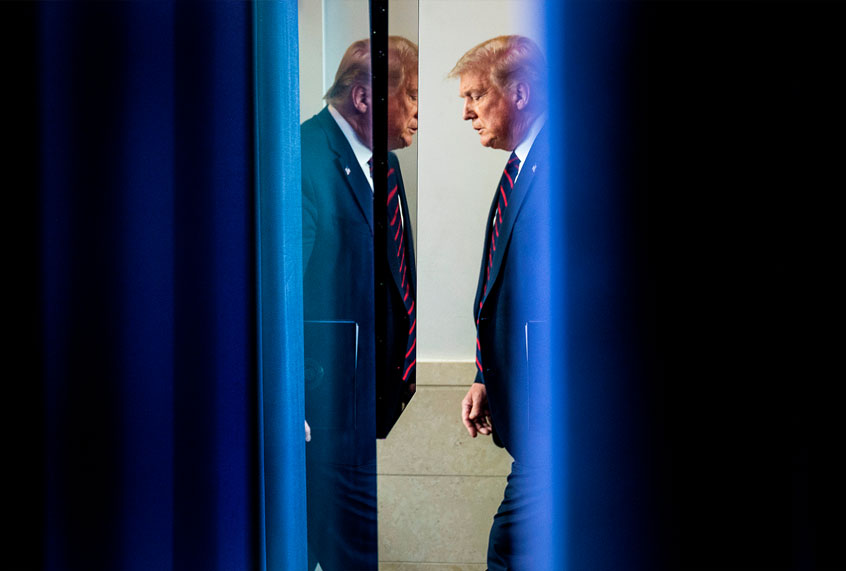 Donald Trump is doomed, and he knows it — in the limited, animalistic way he ever knows anything. His electoral prospects are dwindling toward the mathematical vanishing point, and his historical legacy is now sealed. There is no possible future in which he will not be remembered as the most catastrophically corrupt and incompetent U.S. president of the past 100 years, and quite possibly ever. If it’s any consolation to him, the damage he has done is enormous, and as Paul Rosenberg explored for Salon this weekend, it may never be undone.

No, I will not pause to listen to your sermon about “overconfidence,” or your superstitious lamentations about the lingering trauma of 2016. I was there too, and it was nothing like this. In fact, I wrote two articles that year — after attending the Republican and Democratic conventions, respectively — arguing that it felt like Trump was winning and that the Hillary Clinton campaign seemed clueless.

But all of us who covered that campaign were torn between what we could feel was happening, on a sort of electrical level, and the normative logic that suggested only one plausible outcome. So the first response to your demand for wolfsbane and incantations is that the dynamics of 2020 are completely different, and the second is that I’m not running Joe Biden’s campaign — which is a good thing for both of us — and if the Democrats find a way to screw up an election that’s been handed to them on a silver platter, wrapped in crinkly designer paper with a Godiva chocolate on top, then the whole party should definitely be sold off for scrap but it won’t be my fault.

Everything about Trump’s behavior in recent weeks or months speaks to this dawning, if childlike, half-awareness that he is staring right in the face of doom, defeat and failure. He has played chicken with those things his entire life, and has convinced himself — and to a large extent, the rest of us — that he can evade them through sheer cunning and the most brazen, shameless forms of salesmanship, which he mistakes for intelligence. None of that is working now, and his desperation is palpable.

It seems clear that Trump believed he could suppress or prevent the coronavirus pandemic through sheer force of will, and when that failed he believed he could use his dipshit Jedi mind-tricks to convince people that it either didn’t exist or didn’t matter. He believed that the Black Lives Matter protests were playing into his hands, and that out there in what he regards as “real America,” people remained hypnotized by the same provincial, racist anxiety and terror that was so potent from the late 1960s well into the ’90s. (To be fair, numerous mainstream observers shared that view at first, and I don’t mean to suggest that political current no longer exists.)

He believed his ludicrous Bible-clutching photo-op in front of St. John’s Church would cause patriotic moms and dads in the heartland to weep and swoon at his godly power. (In fact, I believe a great many devout Christians, including some conservative evangelicals, felt profoundly insulted, and not for the first time.) He believed his Keystone Kops pseudo-military intervention in Portland, Oregon — mail-order fascism on the cheap, as Salon columnist Lucian K. Truscott IV has put it — would be a display of macho dominance that would make the notional “suburban housewives” he both desires and despises go wobbly in the knees.

None of it’s working even a little, and after last week’s report that the U.S. economy contracted at an annual rate of nearly 33 percent in the second quarter — which is three times worse than the second-worst quarter recorded in the 73 years that such statistics have been collated — the Trumpian narrative has been reduced to shameless buck-passing and whining about the unfairness of fate, which is the behavior of losers, and of abuse victims who have grown up into abusers. A massive economic recession, more likely a depression, and what could well be 180,000 to 200,000 Americans dead by Election Day are not the kinds of headlines from which a presidency recovers. Trump and his shrinking band of courtiers can blame Barack Obama and Tony Fauci all they want, but the delusional zeal of the early Trump era has vanished, and what’s coming off those people now is the flop-sweat of desperation.

Trump’s supposed Republican allies, while still fearful of his fanatical voter base, have begun to back away from him, none too subtly. Needless to say, that has nothing to do with any version of political principle or any respect for “democratic norms”; the Republican Party left those things by the roadside a generation ago. For so-called leaders like Mitch McConnell and Kevin McCarthy, the issue now is simply survival: Their immediate task is to limit the damage of what they clearly understand will be a November bloodbath, and then to position themselves amid the ugly intra-party power struggle that is sure to follow. Their union with Trump was always a marriage of convenience, and they always knew no actual loyalty was involved on either side. Now that the convenience has evaporated, it probably feels good — in a small-minded, sadomasochistic register — to be the ones dumping Trump rather than the other way around.

I’m quite sure that McCarthy and McConnell, along with many other prominent Republicans, cannot wait to be rid of Donald Trump and are already rehearsing various death-of-Stalin monologues that range from “well, he expressed the true greatness of America but” to “honestly, I never really knew the guy.” What they may discover, however, is that the Republican Party after Trump is something like John Hurt’s character in “Alien” after the face-hugger falls off. He seems fine and normal! But as the robot scientist knows, he’s been impregnated with something awful, and once it gets a decent feed down there in the gummy darkness, it’s bustin’ out.

The remaining questions about Donald Trump are all much larger than he is, which is nothing new. One of the most striking peculiarities of this bizarre era is that such a small person, with such a limited understanding of reality, could command the national stage and a massive proportion of the media’s attention for the better part of five years. All by itself, that fact does not speak well of the condition of American civil society, let alone “democratic discourse.” Yet at the same time, the monotonous narcosis of the Trump years has also provoked a vigorous reaction, visible in different parts of society in different ways: #MeToo feminism, Black Lives Matter, the 2018 midterms, the upsurge of left-wing or “socialist” politics catalyzed by the Bernie Sanders campaign, which the Democratic Party has been startled to discover it cannot control or contain.

Will Trump try to delay or cancel the election? Will he try to rig the election by sabotaging the Postal Service or claiming premature victory based on partial results, or both? If and when he loses, will he protest that the whole thing was rigged and unfair, and announce that he’s staying in the White House indefinitely while Bill Barr investigates Democratic voter fraud? I don’t want to underestimate the inherent danger of this situation: We have a deeply wounded and profoundly delusional person at the head of the federal government, who is convinced that the world is unfairly stacked against him and does not care whether the things he says have any relationship to reality.

So, yes, Trump could try to do any or all of those things. But remember that he’s a “sniveling coward,” in the immortal words of Ted Cruz (who arguably turned out to be an even bigger one), not to mention profoundly ignorant and totally incompetent. Ultimately, I don’t think Trump has anywhere near the courage, the confidence or the means to pull off any version of a coup with success. He’d need a posse of powerful allies — not just Barr, who might enjoy giving it a whirl, but Republican leaders in Congress, the military brass, the Secret Service and the FBI, the Supreme Court and, most important of all, the top one-tenth of the one percent in the investment and banking class.

You won’t catch me claiming that “democratic institutions” or the “rule of law” will rescue us from Donald Trump. That manifestly has not happened, and any such hope rested on a set of charmingly old-fashioned assumptions in the first place. None of the people I just mentioned are greatly concerned with that stuff, but all of them — especially the last group, the financial and corporate overlords who control all the wealth and most of the power in our society — do not much care for chaos and disorder, and have seen about enough of it over the last four years.

No doubt Wall Street feels some collective concern about the potential cost of a Democratic presidency, especially under current social conditions — but Joe Biden, the longtime “senator from MasterCard,” was the Democrat the Mr. Monopoly crowd wanted all along. After the disastrous meltdown of the Trump presidency, they’ll welcome Biden with open arms, along with helpful dossiers of potential Cabinet nominees.

As Donald Trump has secretly known all along — stupid, injured manchild that he is — none of the people in the privileged classes of New York or Washington or California who pretended to love and admire him truly understood his greatness, and now that the waves are crashing over the bow they’re scurrying off the deck. He’ll be left at the end with the losers and incels and rubes in the red hats — stricken, lonely people who looked to him as a savior and for whom he feels only contempt. People he probably hates more than he hates Muslims or Mexicans or Black people, and possibly even more than he hates himself.