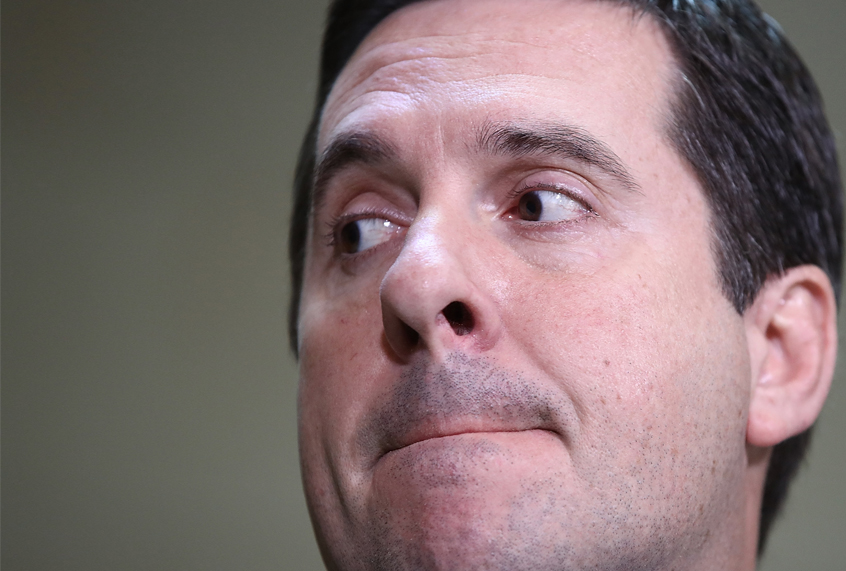 Rep. Sean Patrick Maloney, D-N.Y., brought up news reports that materials intended to damage Biden as part of a “foreign disinformation plot” were sent to Nunes, the top Republican on the committee, and other senior Republican lawmakers by Kremlin-linked Ukrainian lawmaker Andrii Derkach, according to a transcript of the meeting released by the panel.

Maloney continued to press for an “explanation” from Nunes on why he was “not prepared to respond to a simple question whether he has received materials that have been called into question that seem to denigrate a former vice president.”

Maloney noted that the committee staff was already in possession of “evidence that a package was received.”

The committee’s Democratic majority learned that Nunes had received the materials after a DHL shipping receipt was sent to the majority’s office instead, according to Politico. Officials told the outlet they asked for access to the material, but Nunes had refused to share it. Democrats reported the package to the FBI in January.

“I guess this is a case where silence speaks volumes,” Maloney replied when Nunes did not respond to repeated questions from the Democrat on Wednesday.

Republicans on the panel later complained that Maloney’s questioning was “very rude.”

“Members don’t question other members in hearings,” Rep. Rick Crawford, R-Ark., told Breitbart News. “This wasn’t on the agenda for the meeting. It was really inappropriate in my opinion and pretty childish.”

The outlet reported that lawyers for the House Republicans might bring ethics claims against Maloney.

However, Crawford appeared to confirm in the interview that Nunes had received a foreign package and turned it over to the FBI.

“It’s standard practice that if you get a package from unknown source in a foreign country, it’s probably a good idea to call the FBI and let them handle it, and not handle those packages and don’t open them and go, ‘Hey I wonder what this is? I guess it’s Christmas came early this year,'” Crawford said. “No, you follow the protocol, which is you turn that over to the FBI. That’s what happened.”

Maloney rejected the Republican claim that he was out of line.

“Russians are still trying to interfere in the election using bogus claims about events in Ukraine, so I don’t know what the secret is,” he told Politico. “‘What’s in the box?’ is my question. Just show us, and explain why it’s some big secret. We’ve literally got the receipts. The committee received this material. Why wouldn’t he share it?”

Democratic congressional leaders sent a letter to FBI Director Christopher Wray earlier this month about details surrounding the packages, which were also sent to Sen. Lindsey Graham, R-S.C., the chairman of the Judiciary Committee, Sen. Chuck Grassley, R-Iowa, who also serves on the committee, and then-White House chief of staff Mick Mulvaney, according to Politico.

The material was sent to the Republicans in January amid the Senate’s impeachment trial, which focused on Trump’s pressure on Ukraine to help damage Biden ahead of the election. Democrats told Politico that they had not received a response from the FBI about the packages in the six months since they first informed the bureau.

Democrats have become increasingly concerned about Derkach, who met with Trump’s personal attorney Rudy Giuliani last December and has since publicly released tapes of Biden’s discussions with Ukrainian officials and held a news conference “publicly declaring his efforts to unite with GOP officials to take down the former vice president,” according to the report.

Derkach told Politico last week that he had sent the materials in hopes of “creating an interparliamentary association called ‘Friends of Ukraine STOP Corruption.'”

He said he had also notified Graham, Grassley, Sen. Ron Johnson, R-Wis., Sen. Gary Peters, D-Mich., and Sen. Ron Wyden, D-Ore., about the materials and his news conferences. Graham, Grassley, Peters and Wyden “indicated they never received materials from Derkach,” according to the outlet.

Democrats said in their letter to the FBI that the materials were part of a foreign effort to interfere in the presidential election to help Trump.

The exchange with Nunes on Wednesday came as the committee voted to release a classified addendum about the interference effort to the full House of Representatives, which Nunes adamantly opposed.

“This document contains extremely sensitive information that Democrats will leak if the document is made available to the full House. That is a fact, and that is the intent,” Nunes said. “In fact, some of this information may have already been leaked — a matter I hope the FBI is investigating.”

Derkach also listed Secretary of State Mike Pompeo as one of the Republicans to whom he sought to deliver information. Pompeo was asked about Derkach during a Senate Foreign Relations Committee hearing by Sen. Chris Murphy, D-Conn.

“I don’t want to comment on any particular individual like Mr. Derkach,” Pompeo said. “I will say this: We’re taking seriously the threats that Russia will try to engage in disinformation campaigns . . .  There’s still work ongoing ,and there’s still unsettled intelligence around these things.”

But several people mentioned by Derkach in his allegations have been called to testify by Jonson, who is investigating Hunter Biden’s role on the board of the Ukrainian energy firm Burisma, which was what Trump pressed Ukraine to do before he was impeached.

Democrats have called Johnson’s investigation a “laundering” effort for a foreign interference campaign to damage Biden.

Democratic leaders expressed concern about the investigation in their letter to Wray.

“We are gravely concerned, in particular, that Congress appears to be the target of a concerted foreign interference campaign,” they wrote, “which seeks to launder and amplify disinformation in order to influence congressional activity, public debate and the presidential election in November.”