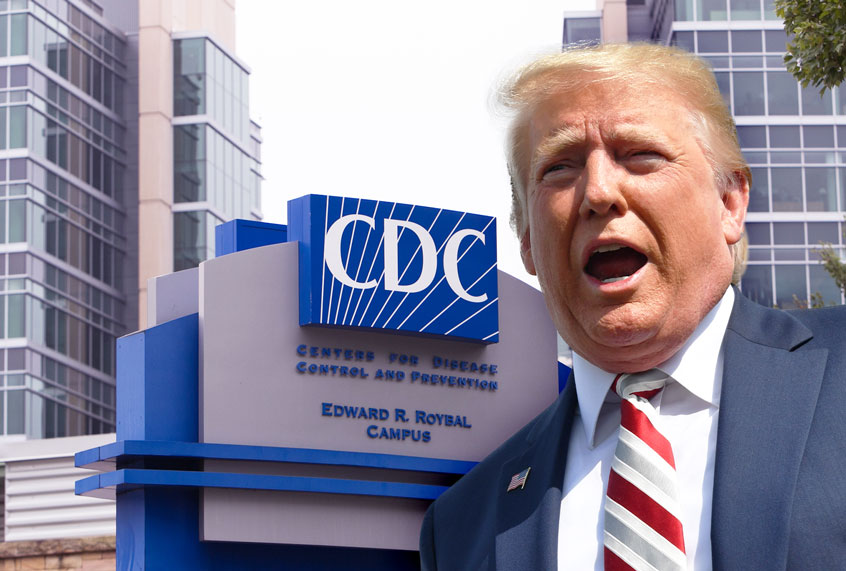 The Trump administration’s abrupt order instructing hospitals to stop reporting their coronavirus data to the Centers for Disease Control and Prevention raised concerns among experts, but viral rumors that it is responsible for the decline in cases nationwide are inaccurate.

The Department of Health and Human Services abruptly instructed hospitals earlier this month to stop sending their data to the CDC and send all patient information to a central database in Washington, sparking concerns that the data was being politicized.

Roughly around the same time as the switch was announced in mid-July, the recent upward curve in coronavirus began to flatten. Although the rate of new cases nationwide is still growing, the increase has been much slower recently.

The timing sparked viral rumors, like the widely-shared graphic below, that the data switch was responsible for the decline in cases, though experts have refuted this claim.

Some also seized on a tweet from the Covid Tracking Project, an initiative launched by The Atlantic, reporting that “state data on current COVID-19 hospitalizations is unstable” and “incomplete” because of the “HHS changeover.”

But while the data has been incomplete, the researchers at the Covid Tracking Project “explicitly don’t think the cases flattening has anything to do with the HHS changeover,” Alexis Madrigal, who helped build the tracker, told Salon.

Dr. Tom Frieden, the former head of the CDC under Barack Obama, agreed that the switch is not related to the decline in new cases.

“We do have concerns about the completeness and timeliness of data being collected and reported,” Frieden, who now serves as the president and CEO of Resolve to Save Lives, an initiative of Vital Strategies, told Salon. “However, the data seem to bear out that in at least some places [there] is an actual decrease — although with still very high rates — and that is not an artifact of testing or data reporting.”

The problems with the new system “only affect hospitalization data,” the Covid Tracking Project explained in a blog post:

Our case, testing, and death data from states continues to show the effects of testing and reporting backlogs and day-of-the-week reporting differences, but are as reliable as they were before the new directive. And we find no evidence to support a popular online conspiracy theory that the switchover from the CDC system to the Health and Human Services system explains a national plateau in new coronavirus cases.

Hospitals do not report their case count or testing data to the federal government, the project’s data scientists explained. The data is drawn from many different independent sources.

But the switchover has been a “catastrophe” in other ways, Dave Dillon, a spokesman for the Missouri Hospital Association, told Salon.

“The shift has essentially left the state in the dark for two weeks,” he explained. Dillon’s association had been reporting data to the CDC’s National Healthcare Safety Network reporting system, but the HHS’ abrupt directive, “with little or no advance knowledge or on-boarding assistance from HHS, created a chaotic environment for hospitals,” he said.

Frieden said the switchover was a mistake.

“The NHSN has been the health care reporting system most widely used by our nation’s hospitals, and should not be replaced, especially abruptly in the middle of a pandemic,” he said. “We need accurate and timely data for an effective public health response to the pandemic.”

The data should be updated daily but the “most recent update was a week ago,” he said. “There are also inconsistencies with data, including key metrics such as ICU capacity and inpatient hospital bed occupancy. From other data sources, we know that 29 states are seeing increased hospitalizations.”

Some states, like Florida, have had “issues with transparency,” which “may also contribute to this confusion,” Dr. Georges Benjamin, the executive director of the American Public Health Association, told Salon.

But the “biggest issue is we have lots of data and it is not consistent across the nation,” he said. “Long reporting delays; incomplete data and disparities in data makes it difficult to really know where we are.”

Michael Caputo, a former Trump campaign adviser who was embroiled in the Russia investigation before being tapped to serve as a spokesman for HHS, told reporters earlier this month that the switchover would improve data reporting.

“The new faster and complete data system is what our nation needs to defeat the coronavirus and the CDC, an operating division of HHS, will certainly participate in this streamlined all-of-government response,” he said.

HHS did not respond to questions from Salon.

Vice President Mike Pence also insisted that the change was “about making the system better.”

But Dr. Daniel Pollock, who heads the CDC’s Division of Healthcare Quality Promotion, which oversees the collection of hospital data, refuted that claim.

Pollock told NPR that the CDC system was not slow and processed data as quickly as other reporting methods. He questioned whether HHS could do as good a jobm given the CDC’s longstanding relationship with hospitals.

“They’ve been stood up relatively recently,” he told the outlet. “And they don’t have the track record, the expertise that we’re able to provide.”

The change came after Frieden and three other former CDC chiefs warned of the Trump administration, “political leaders and others attempting to undermine the Centers for Disease Control and Prevention.”

Democratic lawmakers also sounded the alarm after the change.

“The American people need transparency from the nation’s public health agencies,” Rep. Don Beyer, D-Va., said on Twitter. “The Trump Administration has politicized the pandemic response at every step, we simply can’t trust them not to.”

“Only the CDC has the expertise to collect data,” argued Rep. Donna Shalala, D-Fla., who served as HHS secretary under President Bill Clinton. “I think any move to take responsibility away from the people who have the expertise is politicizing.”

The change has particularly hit smaller states hard because many were using the CDC system that HHS replaced to report data. Nine states had fewer than 50% of their hospitals reporting data through the new HHS system as of last week. In states like North Dakota and Louisiana, that number was below 30%.

The Missouri Hospital Association was forced to temporarily shut down its data dashboard due to the incomplete information.

“Although Missouri is likely back on track with our hospital-specific data reporting as of today, the shift has essentially left the state in the dark for two weeks,” Dillon said. “So, during the transition, some data was reported incorrectly.”

Dillon said that the lost two weeks came at a critical time as the state’s infections spiked and hospitalizations grew during the transition.

“The absence of information in Missouri reduced local leaders’ line of sight on the virus, effectively eliminating their ability to make good decisions in the interest of their communities,” he said. “HHS is likely on track to offer very good information. We are not critical of the effort to collect and report the data. However, their process to get to that product was a catastrophe.”

Though Dillon is optimistic about the data collection, “the rush to move platforms was unnecessary with significant consequences,” he said. “Overall, it has been an unfortunate incident.”

Frieden, Benjamin and other public health leaders working with Resolve to Save Lives released a list of 15 essential indicators, including confirmed and probable cases, data related to testing rates and hospitalization rates, and even data on the percentage of people wearing masks in public indoor settings, that should be reported by each state to ensure transparency and the public’s ability to respond to the situation in their area.

“There must be a commitment to accurate and timely reporting of data on the 15 essential metrics we outlined, with complete transparency,” Frieden told Salon. “Incomplete data prevent us from getting the full picture of the current course of this ever-changing pandemic, and leave us flying blind as we work to get ahead of it. If we don’t have a full and accurate understanding of what the status of the pandemic is today, we won’t be able to fight it as effectively as possible tomorrow.”